Scientists at Bangor University find indications that a north-south divide in trends of saltmarsh decline and gain across the UK might be explained by differences in sediment supply. 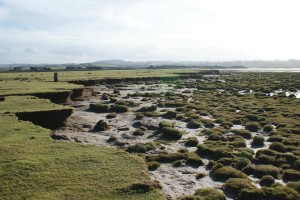 A changing salt marsh in Morecambe Bay, North-West England. The debris fields in front of an eroding cliff show signs of marsh recovery.

Saltmarsh erosion is caused by a variety of processes, including sea level rise rates, storm / flood events, and coastal engineering works. However saltmarshes are naturally able to recover from disturbance if a critical and regular supply of sediment reaches the marsh, which may come from rivers emptying into estuaries or from the sea, transported by waves and the tide.

PhD students, Cai Ladd and Mollie Duggan-Edwards, used OS maps and aerial photographs to track changes in more than 40% of saltmarshes across the UK from the mid-1800s onwards. They found that marshes in the south have been eroding, and northern marshes have been expanding. Why could this be?

The students found that volumes of fine sediments were 2-3 times greater in the north where marshes are expanding, than those in the south where marshes are eroding. From this work, the students conclude that marshes in the north are likely better equipped to deal with future climate change than marshes in the south because of differences in the availability of sediment supply. This work is currently being prepared for publication. 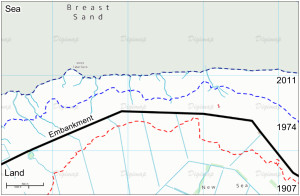 Map of a changing salt marsh in the Wash, North-East England. A period of reclamation led to significant losses of marsh extent, followed by recovery in front of the embankment.

For more information about salt marshes, or to keep track of the scientists’ progress, visit: