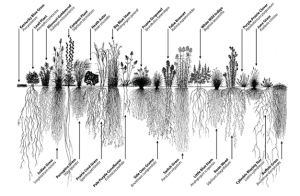 Above and below ground plant structure

It is well known that plants aid soil stability, with above-ground vegetation and roots combining to physically protect soil against erosion. What is less studied is the link between plant diversity, root biomass and erosion protection. This study showed how diverse plant communities boosted root biomass, with knock-on positive effects on soil stability. And is one of the first times the link between biodiversity and erosion protection has been shown in natural ecosystems, as opposed to grassland plots or mesocosms. 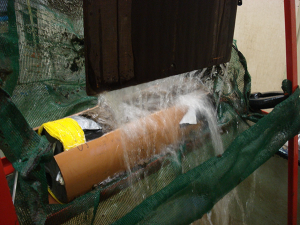 Each soil core was cut open and exposed to erosive water pressure using a re-circulating flume. 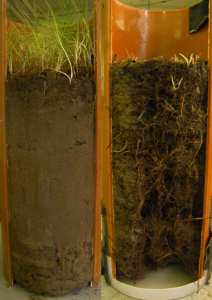 A core, before and after erosion tests (Note above-ground vegetation had been cut in the after picture).

Unsurprisingly, they found that soil erosion rates were much greater in sandy Morecambe Bay than clay rich Essex. Interestingly, they discovered that soil erosion rates fell with increased plant species richness, particularly in erosion-prone, sandy Morecambe Bay where 44 % of the variation in erosion rate was explained by plant diversity. In Essex, where clay soils bind closely together to prevent erosion, plant diversity still explained 18 % of the variation in erosion rate. They also reported that functionally diverse plant communities comprising of a mix of rushes, grasses and flowers tended to be particularly resistant to erosion, adding support the value of biodiversity in the natural world.

To read the full article visit:
Journal of Vegetation Science